The world population is exponentially growing and with it the global need for energy.  If we imagine that consumption parallels population growth, then the demand -most notably for transport and heating, which consume vast quantities of energy – will continue to rise and solutions need to be put into place.

Currently, electricity production is dependent on market prices for fuel, and more importantly the UK does not have security of supply. It is estimated that 35% of the UK’s energy supplies are currently imported.

With a quarter of the UK’s generating capacity coming to the end of its life over the next 10 years, as a nation we need to make strategic investments in our energy infrastructure that will be felt throughout the rest of the century.

The chart below shows the UK electricity supplied (not necessarily utilised) by fuel type according to the Carbon Brief 2019. 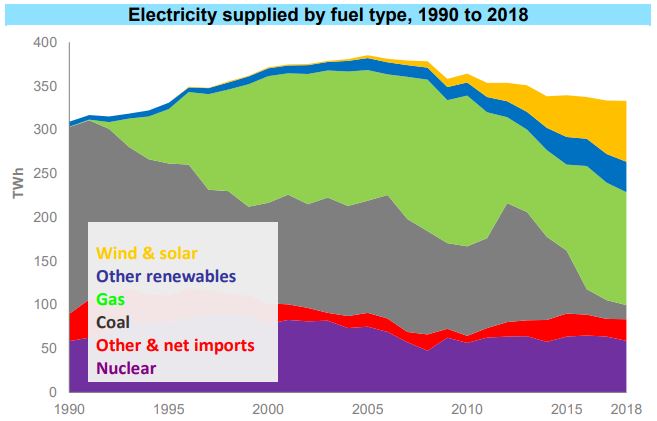 As we can see, fossil fuels provide the main provision for conversion to electricity primarily, due to economic favourability.  Drawbacks to consider with fossil fuels are pollution from burning coal, gas and oil, mining and off shore drilling hazards, and also the national dependency on these sources from unstable countries in the far-east.

‘Renewables’ harness energy from their environment. Wind, solar, wave and tidal, for example, are driven by natural earth cycles.   Unfortunately, these sources cannot be relied on to generate in the region of their maximum electricity output at all future times of high electricity need.  This results in intermittency problems that put incredible strain upon the national grid.

Nuclear power is generated using Uranium, which is a metal mined in various parts of the world. However Thorium is being considered as an alternative – and more abundant nuclear fuel – which has no affiliation with weapons manufacture.

A dedicated thinker and logistician, Professor David MacKay collaborated with the public in producing a freely available book which has detailed analysis of the realistic provision from each of these energy sources [1].

Unfortunately, the image of nuclear as a civil power source is controversial due to the fear of low level radiation creating illness or genetic mutations. These worries are completely unfounded, and a sole product of propaganda by entertainment outlets, journalists and even politicians during the cold war.

Governments are turning to nuclear energy as a plausible form of energy because it is increasingly economic, reliable and environmentally friendly. The wind does not always blow and the sun does not always shine, but nuclear energy can be produced regardless of the weather, which is why the nuclear industry is almost an essential part of the future of sustainable energy.

The global addiction to fossil fuels may well be a in part a result of fear to change even though nuclear energy can offset environmental costs of fossil fuels in terms of reduction of greenhouse emissions.

A proposal is to make hydrogen from water using clean energy (renewables and nuclear) at reasonable costs, instead of steam methane reforming. Hydrogen may even be used where electricity/batteries are not an option (e.g. long distance transport and aviation).

Another proposal is to look at the potential for combined heat and power (ie for district heating) waste heat from biomass/small modular reactors.

Civil nuclear energy offers the potential for positive impact considering conflicts provoked over the need for oil, problems of warming due to greenhouse gases, and the impact of chemical toxins from fuel burning on human health.

1)  ‘Sustainable Energy Without Hot Air’ – Professor David MacKay considers how each potential energy source could meet consumption in the UK.