Small Modular Reactors (SMRs) are part of a new generation of nuclear power plant design being developed in several countries to supply small communities.  They are defined as those with an electricity output of less than 300 MWe, although general opinion is that anything with an output of less than 50 MWe counts as a small reactor.  Other than residential electricity capacity – which could theoretically support a small city in the UK residential capacity and not much else – however, their design is primarily suggested for use in high-power industrial units – e.g. smelting.

SMRs tend to be pre-manufactured at a plant and brought to site fully constructed, optimal in remote areas. While the small power output of an SMR means that electricity will cost more per MW than it would from a larger reactor, the initial cost of building the plant is much less than that of constructing a more complex, large nuclear plant, making the SMR a smaller-risk venture for power companies than other nuclear power plants.

Of the designs available to us here in the UK, the integrated pressurised water reactors are most technologically ready, such as those already used in submarines. There are estimated to be in the region of over 45 SMR designs under development in the US, Europe, China and elsewhere for various purposes [SOURCE: IAEA Advances in Small Modular Reactor Technology Developments]. 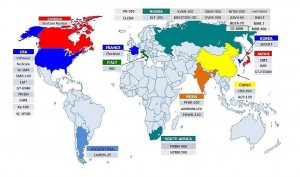 Small Modular Reactors (SMRs) have been a catalyst for renewed interest in the possibility of using smaller, simpler units for generating electricity from nuclear power. This interest is also driven both by a desire to reduce overall cost and to provide an alternative source of power to large grid systems.

One of the barriers to development of such a technology in the UK is the licensing aspect, making smaller designs potentially more challenging than larger designs [1].

Moltex are an UK-Canadian venture who have developed a stable salt modular reactor ready for implementation now. Using an incredibly safe design, the liquid salt fuel mixture is contained within solid fuel assemblies. The fuel assemblies are then submerged in a pool of pure liquid salt coolant.