November 2015:  The Nuclear Regulatory Commission (NRC) received news that their petition to change the application of the Linear no-threshold (LNT) model has been endorsed by the US Chamber of Commerce: 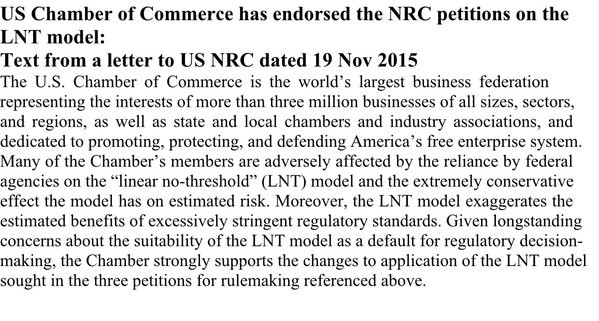 Why Is this good news?

In a linear ‘no-threshold’ “LNT” model (B below) has historically been used to determine safe levels of ionizing radiation. The assumption made is that the long term, biological damage caused by ionizing radiation (essentially the cancer risk) is directly proportional to the dose. Refer to line (B) below [1]. 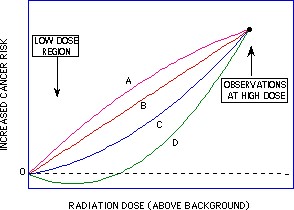 This model inherently assumes that the only way to eliminate risk is to have absolutely no dose (‘no threshold’).  What is more, cells and organisms have adapted very well to thrive in the presence radiation – since life spread on Earth.

The stringent limits that have arisen as a result of adopting the LNT model for regulatory purposes are nigh on impossible to meet for the nuclear industry, especially given the ubiquitous nature of radiation in the environment, the result is that nuclear facilities feel forced to comply with standards which demand exposure of radiation to be kept to the absolute minimum, taking unnecessarily precautions.

Alternative assumptions for the extrapolation of the cancer risk vs. radiation dose to low-dose levels, given a known risk at a high dose:

Note for example, that in the ‘hormesis’ (D) model, the dose-response relationship tolerates low-level radiation (such as background); and that low levels of radiation have no detrimental effect on a biological organism, but the opposite, by being beneficial.