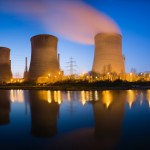 Fossil fuel however, is a finite resource, the cost of which increases sharply as the availability decreases.  They become more difficult to mine as reserves are diluted.

But while they still account for most of the electricity produced in the UK, there are major problem areas  such as security of supply and environmental factors:

We rely primarily on foreign imports of coal, oil and gas – all subject to world-market forces of supply and demand.  It means the cost of the electricity is tied to the price of the fuel used to produce it.  And the more we import, the more control we lose over our ability to set a fair price for the electricity we consume. The trend, as we all know too well, is increasingly expensive bills. What’s more, having to rely on imports means we have less security of supply.  As such, we are increasingly dependent upon good relations with other countries for supply.

The release of hazardous chemicals from fossil fuel combustion cause unknown quantities of people to be diagnosed with ailments such as heart disease, cancer and respiratory disease and developmental impairments – especially vulnerable groups such as children and the elderly [1].  Toxins include oxides of nitrogen (NOx), oxides of sulphur (SOx), and fine particulates which cannot be filtered, including heavy metals.  Dioxins, also formed during combustion are known carcinogens.

All of these are carried far from the stack and are thought to contribute, to a degree to reduced quality of life for asthma sufferers for example.  Fly ash, which is laden with toxic heavy metals, is disposed by landfill. Coal, in particular, remains a major driver of CO2 emissions accounting for 43% of emissions in 2012.

Coal is the dirtiest method of producing energy and is responsible for a lot of the chemical pollution we hear about in China and India.

Perhaps the capital costs for building a coal fired power station are lower than they would be for an equivalent nuclear facility, but running costs for coal can be higher, according to a report by The Royal Academy of Engineering in association with PB Power.  See ‘Cost‘ for more information.

While new technologies known as Carbon Collection and Storage (CCS) could potentially ‘clean up’ fossil fuel power generation, they are currently unproven, extremely costly so will require huge subsidies and will bring about a doubling of electricity costs.

During the big freeze of 1963 in the UK, coal was frozen and unable to be processed at the coal-fired power stations. It was up to those operating nuclear power stations of the time to run (at 98.5% of fuel load) through the whole of January 1963.

Natural gas is a cleaner fuel than oil or coal, as it emits fewer particulates and burns more efficiently.

However, while gas power stations are cheaper than nuclear power stations to build, gas prices are nonetheless linked to oil, which as we all know, are increasing.

Also, having methane in it’s make up, which itself is  23 times more environmentally hazardous in it’s potential to cause global warming than carbon dioxide, any leaks in the thousands of miles of pipeline necessary to transport it, will contribute to global greenhouse gases.