Misrepresentation over cost is cited, like the nuclear waste issue, as a reason to say “No” to the nuclear option. Ironically, it is this lack of confidence from the public that contributes to an inflated cost of nuclear power.

New build nuclear power stations are expected to include future costs such as decommissioning, clean-up and radioactive waste storage as well as the high capital and costs for the site.

* Nuclear reactors in the UK have historically been generally large and complex, with lots of reinforced concrete and nuclear-grade quality assurance programs. As a result they tend to be expensive to build (see image capital costs, below).

* Once built, fuel and operating costs are relatively cheap. E.g. One kilogram of uranium will yield about 20,000 times as much energy as the same amount of coal. Also, fuel costs aren’t linked to volatile gas and oil market forces.

Other data received courtesy of a report by The Royal Academy of Engineering in association with PB Power supports the claim that nuclear is competitive with other forms of electricity generation.  Capital costs are greater than those for fossil fuel-fired power stations, but running costs and the cost of fuel are considerably less. 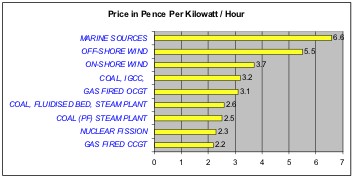 Return on investment from large nuclear plants, such as Hinkley Point C in the UK have the potential to be more significant than those from gas as they can operate for up to 50 years, although the gains are long term, especially if over-regulation, public opposition and high interest rates obstruct progress [1].  The UK Goverment has published a consultation paper on a Regulated Asset Base for nuclear to encourage upfront investment [2].

And if a clear decision is made and committed to, then overall costs can be reduced.  Public confidence in a fleet of similarly designed reactors is the most effective way to dispatch low carbon energy to meet demand [3].

Although we consider the costs associated with large scale projects such as that as that at Hinkley Point C in the UK, there is increasing optimism towards the use of localised small modular reactors (up to 300 MW) – similar output to those used in submarines, ie a tried and tested form of localised electricity generation. These can be installed locally and communities would ideally take ownership of their own electricity generation.  Particular attention is being paid to the molten salt reactor [4].

Comparison with other energy sources

Through its Electricity Market Reform (EMR), the UK government has essentially agreed to regulate a liberalised energy market.  The following chart (courtesy of DECC) shows the relative costs of generating electricity for each technology, based on contractual ‘strike price’ – that is the price fixed between the UK and tendering company to build (in MW/h).   From the low carbon sources of electricity identified below, nuclear is the cheapest – generally speaking, it is questionable as to whether the negative effect on price of feed-in tariffs for renewable forms of energy is very widely recognised. 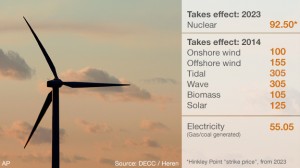 In October 2013, the Government agreed to a new nuclear ‘strike price’ with Electricite de France (EdF) for Hinkley Point C. The key terms include 35-year price for power of £89.50 /MWh from about 2023,  fully indexed to the Consumer Price Index and conditional upon Sizewell C  project proceeding. (If it does not for any reason, and the developer cannot share first-of-a-kind costs across both, the price is to be £92.50 /MWh.)

An examination of National Grid’s Future Energy Scenarios – Cost of Supply – (2016) a report by the Scientific Alliance:  “Despite having installed more than 38GW of renewable energy generating capacity in the last decade, we have reached a capacity crisis. There is no hard evidence that this push for renewables has been an effective way to reduce CO2 emissions, and the cost has certainly been very large. The analysis presented in these two papers makes a strong case for a radical review of energy policy from an engineering perspective, placing equal weight on cost, security and environmental impacts.”

For further information The World Nuclear Association has some excellent detailed research and documentation on the cost of nuclear generated electricity versus other technologies.